A couple years ago I did a TADHack  where I envisioned a cheap, low-powered camera that could run complex computer vision and stream remotely when needed. After considering what it would take to build something like this myself, I waited patiently for this tech to come. Today with Google’s new AIY Vision kit, we are pretty much there.

The AIY Vision Kit is a $45 add-on board that attaches to a Raspberry Pi Zero with a Pi 2 camera. The board includes a Vision Processing Unit (VPU) chip that runs Tensor Flow image processing graphs super efficiently. The kit comes with a bunch of examples out of the box, but to actually see what the camera see’s you need to plug the HDMI into a monitor. That’s not very useful when you want to put your battery powered kit in a remote location. And while it is nice that the rig does not require any Internet connectivity, that misses out on a lot of the fun applications. So, let’s add some WebRTC to the AIY Vision Kit to let it stream over the web.

In this post I will give some background on the kit and show how to use UV4L on a Raspberry Pi Zero. This post aims to be useful to:

The AIY Vision Kit was initially released on December 29, 2017 only at Microcenter. I am glad I reserved one early in November because they quickly sold out of the initial 2000 global unit run. Odds are you will have a hard time getting one until Spring some time unless you want to get ripped off on Ebay. Opening up my AIY Vision Kit

The kit requires a Pi Zero. They recommend a Pi Zero W  since its handy to have WiFi built-in, but I confirmed it worked fine with a normal Pi Zero when I tried it. Important – you’ll need to solder a header to the Pi Zero or buy a Zero WH that includes one. I was lazy and grabbed the wrong solder and butchered my first attempt, which caused me some problems. 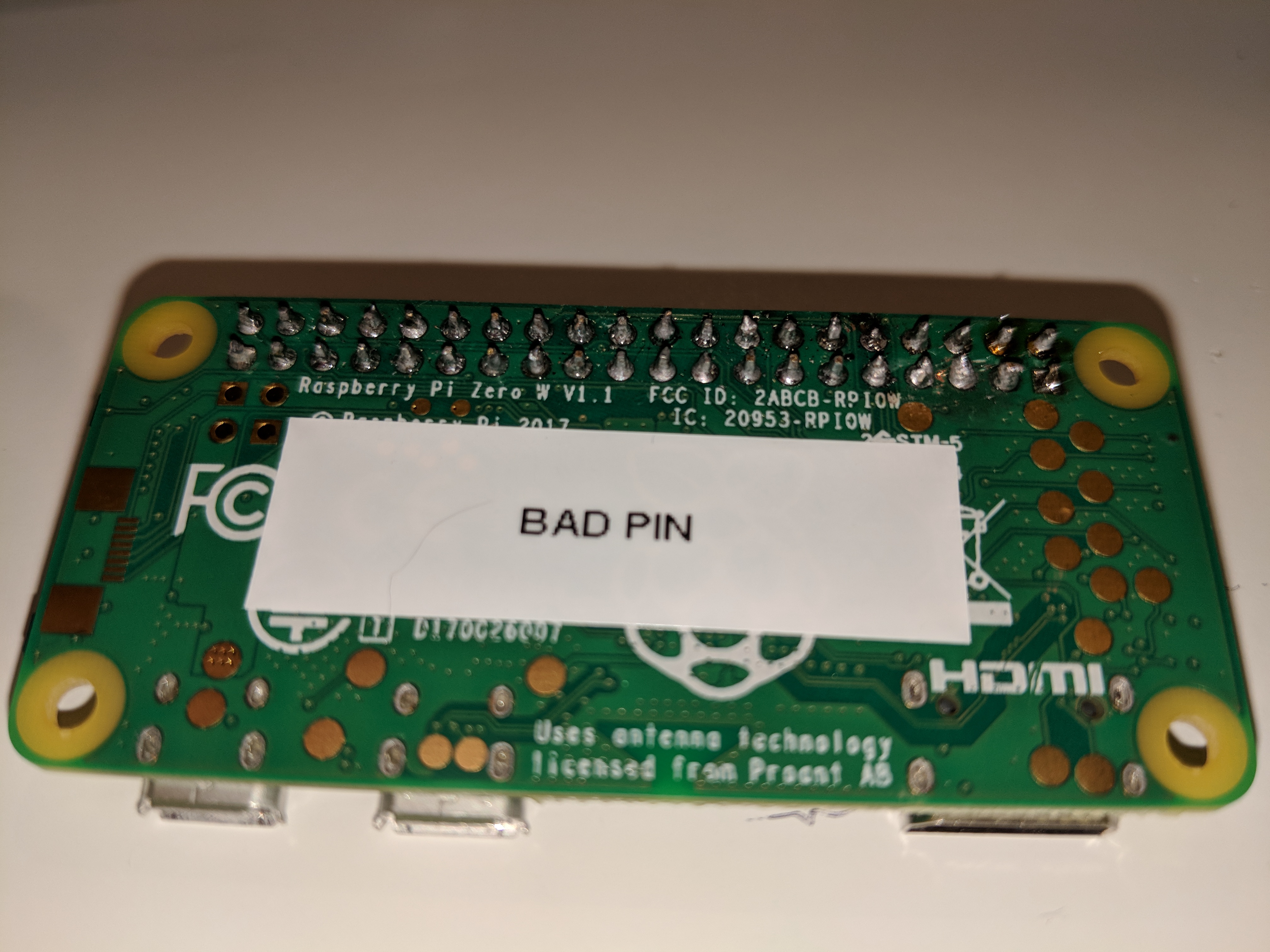 What a bad soldering job looks like.  This caused my Vision Bonnet to fail

The Bonnet is just a small Pi Hat that attaches to the Pi Zero GPIO header. As one of the Googlers on the project was nice enough to explain, the Vision Bonnet reads directly from the Pi Camera via the standard Pi camera flex  cable that passes through it. This means your other process have full access to the Pi Camera while it is running your code. It also means it does not use use any of the Pi’s resources other than what is needed for control signaling and the overhead to transfer the TensorFlow graph (more on that below), which is good because any kind of image processing can quickly exceed the Pi Zero’s single-core 1GHz ARM.  Note that you do need something to initialize the camera since the Bonnett is just passively listening and can’t turn it on.

But that’s not all – the bonnet itself also has its own Micro Controller Unit (MCU) that helps to offload the Kit’s push button with RGB LED and Piezo buzzer while leaving room for an extra 4 GPIO headers, a button, and some onboard LEDs. The main feature of the board is an Intel® Movidius™ Myriad 2 MA2450 vision processing unit (VPU) chip. This is the magic that does all the vision processing heavy lifting . The VPU has hardware acceleration that runs neural network graphs at low power. Intel actually sells this chip on a USB stick for $80 called the Neural Compute Stick (NCS), but it is no where near as easy to develop as the Vision Kit and you need a Pi 3 to run it (ToDo: write a post on that). Google actually wrote the inference engine from scratch to improve the runtime, so they say it is even faster than what you can get on the NCS.

In the end  you get a decent kit for prototyping for less than $100 – way cheaper than the AWS’s DeepLense which you can pre-order for $249 for delivery in June. (Google announced the AIY Vision Kit one day after Amazon announced DeepLense – coincidence?).

*The Pi Zero W’s are usually $10, but I got a few on sale for $5. I see the WH with headers for $14. If you want to solder yourself then you can get a header for less than $1.
**Don’t forget the AIY Vision kit includes not only the VPU chip, but the bonnet board with buzzer, LED, and push button along with wires, a wide angle camera lens, and a cardboard enclosure to hold the whole thing.

Just follow the official instructions to put it together. This was pretty easy – the only thing to look out for is not accidentally folding any of the camera ribbon cables too much as you put it in the box.

Note that the image has been updated a couple of times since I first got the kit and the instructions and code have changed. I originally wrote this post with the AIY image posted on Jan 3 and made some adjustments based on the Feb 21 image.

The kit comes with code for several demos and updates to the repo indicate there is more coming. Here are the models that were available at the time of writing:

It is also possible to build your own TensorFlow model for the AIY Vision Kit with some restrictions. I quickly attempted to compile one of the Object Detection API models, but did not get close to making it work. I hope Google releases more details on how these models were built incase you wanted to adjust the ones they made already and as a guide for making new ones.

The  aiy.vision.inference library comes with 2 methods of providing image input to the models above:

Inference is fast – just 36 ms in my tests, though interpreting the output, which requires the Pi Zero CPU, slowed down my effectively results to around 2-3 frames per second with the Object Detection model.

There are python demos for each of these. The Joy Detection demo runs automatically out of the box. This demo detects faces and displays a color ranging from orange to blue representing the average of what it sees. If it sees a bunch of happy faces it will make an 8-bit noise.

For purposes of this post (and the next), I mainly focused on the Face Detection and and Object Detection models.

There are several ways to WebRTC on the Raspberry Pi, but very few that work well on the limited Pi Zero. My preferred method is UV4L. UV4L has supported WebRTC for a while in its streaming server. It has a bunch of great features, but the ones that matter most for this project are:

Unfortunately UV4L is not an open source project, but it has been around a while and has a reasonably sized community that helps on the message boards.

General Setup on the Pi

If you are running the default AIY Kit image with the Joy Detector demo, then make sure to stop that so UV4L has full access to the camera for now.

stop the joy detection demo that runs by default

Want to run this on a Pi 2 or Pi 3? Everything here will work the same on any Pi 2 or Pi 3 – just put uv4l-webrtc instead of  uv4l-webrtc-armv6 above.

Open a browser that supports WebRTC and go to http://raspberrypi.local:8080/stream/webrtc where  raspberrypi is the hostname or IP address of your Pi (the default hostname on the Vision Kit image is raspberrypi ). Hang up when you’re done.

There are so many options you can play with if you edit the configuration file:

Go ahead and play with that, but let’s first get this working with our kit.

Making it work with the Vision Kit

Let’s run the Joy Detection Demo that we stopped earlier. This time, instead of running the service that is setup, let’s run it manually:

stop the joy detection demo that runs by default
Shell

The demo should be started.

Now go back to  http://raspberrypi.local:8080/stream/webrtc and try to make a call again. You’ll get an “Invalid video device!” That’s no fun 🙁 This is because all the AIY demos use the PiCamera command to initialize the camera and only a single process can access the camera at any one time. The Vision Bonnet is a passive listener, so it does not care who starts the camera, but it needs someone to do it. One approach to get around this is to:

The downside to the above approach is that you are streaming constantly – consuming battery, CPU, and bandwidth.  It is more typical to want to view the video feed after some kind of alert – like if a person or object is detected so you can see what’s going on. It is also a bunch of coding you need to do. Fortunately UV4L provides an easy way to do this without any code changes.

If you haven’t already, hook up a TV/monitor to  the Pi Zero’s HDMI output. Most of the AIY demos that run off of the camera include a preview.  For example, if you run the face detection camera demo:

Then you should see this on the monitor:

For testing purposes I am playing Tears of Steel on my iPad so I can test with multiple faces without convincing my family to stare at the camera while I play around.

We really just want to stream this camera feed over WebRTC without messing with any of the code, so let’s do that with UV4L’s Raspidisp.

Raspidisp captures a stream directly from the display and you can stream this like any other UV4L video source. This means we are effectively using PiCamera.start_preview() to duplicate the camera stream. This will let us keep all the PiCamera code untouched and still stream our video. If you ran the UV4L install instructions then raspidisp should already be running. Run  face_detection.camera.py  again, go back to http://raspberrypi.local:9080/stream/webrtc  and then call again. Make sure you put 9080  as the port – this is the default in /etc/uv4l/uv4l-raspidisp.conf unless you change it.

You should see the camera feed with annotations on your web browser: Notice if you now stop  face_detection.camera.py , you’ll see a video feed of the Pi Desktop.

That’s all you need to do to stream the camera feed from the AIY Vision Kit demos. Just make sure the demo uses the PiCamera.start_preview() otherwise there will be nothing on the display to show. Note that some demos, like the joy_detector  have a command line option where you need to set the display preview alpha to 255 , otherwise the preview won’t be visible.

In my Computer Vision on the Web with WebRTC and TensorFlow post I rendered the image annotations locally in the browser. In this case we are rendering them on the Pi, but limits the ability to provide a responsive UI and chews some additional cycles on the server. It would be better to render the annotations in a browser. To do this, I built a web server for the AIY Vision Kit that leverages the UV4L’s DataChannels to send object details to a browser. As this post is getting long, see Part 2  for details on that project’s architecture, a code walk through, and some optimizations I made to make this work.