Decoding video when there is packet loss is not an easy task.  Recent Chrome versions have been plagued by video corruption issues related to a new video jitter buffer introduced in Chrome 58. These issues are hard to debug since they occur only when certain packets are lost. To combat these issues, webrtc.org has a pretty powerful tool to reproduce and analyze them called video_replay. When I saw another video corruption issue filed by Stian Selnes I told him about that tool. With an easy reproduction of the stream, the WebRTC video team at Google made short work of the bug. Unfortunately this process is not too well documented, so we asked Stian to walk us through the process of capturing the necessary data and using the video_replay tool. Stian, who works at Pexip, has been dealing with real-time communication for more than 10 years. He has  experience in large parts of the media stack with a special interest in video codecs and other types of signal processing, network protocols and error resilience.

WebRTC contains a nice and little known tool called video_replay which has proven very useful for debugging video decoding issues. It’s purpose? To easily replay a capture of a WebRTC call to reproduce an observed behavior. video_replay takes a captured RTP stream of video as an input file, decodes the stream with the WebRTC framework “offline”, and then displays the resulting output on screen.

To illustrate, recently I was working on an issue where Chrome suddenly displayed the incoming video as a corrupt image shown above. Eventually, after using video_replay to debug, the WebRTC team found that Chrome’s jitter buffer reimplementation introduced a bug that made the video stream corrupt in certain cases. This caused the internal state of the VP8 decoder to be wrong and output frames that looked like random data.

Video coding issues are often among the toughest problems to solve. Initially I was able to develop a test setup that reproduced the issue in about 1 out of every 20 calls. Replicating the issue this way was very time consuming, often frustrating, and ultimately did not make it easy for the WebRTC team to find the fix. To consistently reproduce the problem I managed to get a Wireshark capture of one of the failing calls and fed the capture into the video_replay tool. Voilà! Now I had a test case that reproduced this rare issue every single time. When an issue is as reproducible as this it’s usually very attractive for someone to grab and implement a fix quickly. A classic win-win situation.

In this post I’ll demonstrate how to use video_replay by going through an example where we capture the RTP traffic of a WebRTC call, identify and extract the received video stream, and finally feed it into video_replay to display the captured video on screen.

video_replay takes the input file and feeds it into the RTP stack, depacketizer and decoder. However, it currently lacks the capability to decrypt SRTP packets for encrypted calls. Encrypted calls is the norm for both Chrome and Firefox. Decrypting a WebRTC call is not a trivial process, in particular since DTLS is used to securely share the secret key that’s used for SRTP so the key is not easy to get. To get around this, it’s better to use Chromium or Chrome Canary since they have a flag that will disable SRTP encryption. Simply start the browser with the command-line flag –disable-webrtc-encryption and you should see warning should be displayed at the top of your window that you’re using an unsupported command-line flag. Note that it’s necessary that both parties in the call run unencrypted; if not, the call will fail to connect.

First, start to capture packets using Wireshark. It’s important to start the capture before the call starts sending media so that you make sure the entire stream is recorded. If the beginning of the stream is missing from the capture, the video decoder will fail to decode it.

Second, open a tab and go to chrome://webrtc-internals (or Fippo’s new webrtc-externals). Do this prior to the call in order to get all the information needed, specifically the negotiated SDP (see the webrtcHacks SDP Anatomy guide here for help interpreting this).

Finally, it’s time to make the call. We’ll use appr.tc as an example, but any call that’s using WebRTC will work. Open a second tab and go to https://appr.tc/?ipv6=false. In this particular example I disabled IPv6 because of a currently unresolved issue with with video_replay, but I expect that to be fixed very soon.

Now, join a video room. RTP will start flowing when a second participant joins the same room. It doesn’t matter who joins first, except that chrome://webrtc-internals will look slightly different. The screenshots below were taken when dialing into an existing room.

In order to successfully extract the RTP packets for the received video stream and successfully play them with video_replay we need to gather some details about the RTP stream. There are a few ways to go about this, but I’ll stick to what I believe will give the clearest instructions. What we need is:

First, expand the stats table for the received video stream, which will have a name like ssrc_4075734755_recv . There may be be more than one, typically a second stream for audio, and possibly a couple that has the _send suffix which holds the equivalent statistics for the sent streams. The stats for the received video stream are easily identified with the _recv  suffix and mediaType=video . Make a note of the fields ssrc , googCodecName  and transportId , which is 4075734755, VP9 and Channel-audio-1 respectively.

You may ask why the video stream has the same transportId as the audio channel? This means that BUNDLE is in use which makes audio and video share the same channel. If BUNDLE is not negotiated and in use, audio and video will use separate channels. Next, we’ll look at the negotiated SDP to get the RTP payload types (PT). In addition to the PT for the video codec in use, we must also find the PT for RED which WebRTC uses to encapsulate the video packets. SDP describes the receive capabilities of a video client, so in order to find the payload types we receive we must look at the SDP our browser offers to the other participant. This is found by expanding the setLocalDescription  API call, find the section m=video  and the following rtpmap attributes that defines the PT for each supported codec. Since our video codec is VP9, we’ll note the fields a=rtpmap:98 VP9/90000  and a=rtpmap:102 red/9000 , which tells us that the payload types for VP9 and RED are 98 and 102, respectively. 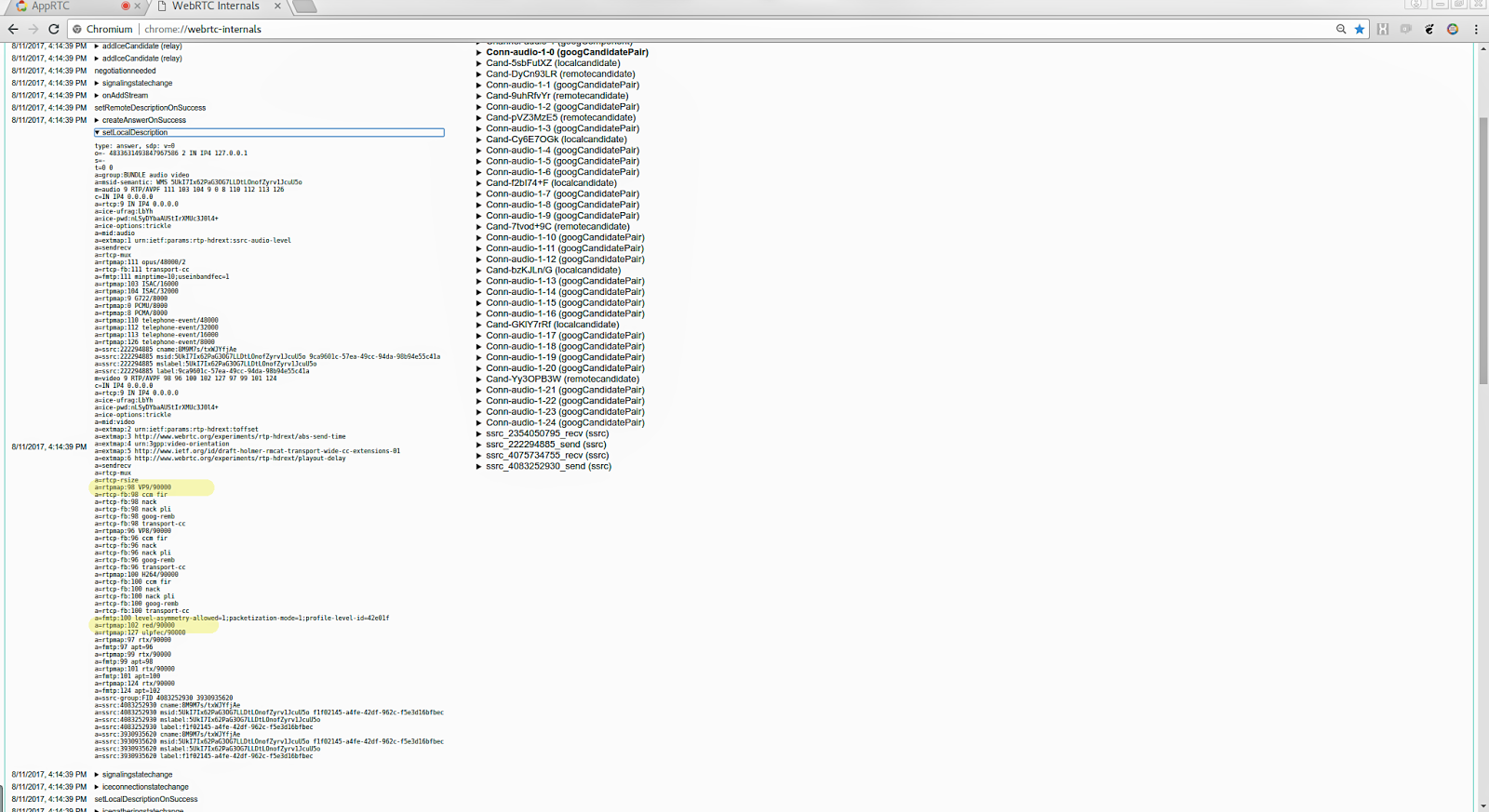 If you’re looking for information regarding the sent stream instead of the received stream, you should look at what the other participant has signaled by expanding setRemoteDescription  instead. In practice, however, the payload types should be symmetrical, so whether you look at setLocalDescription  or setRemoteDescription  shouldn’t matter, but in the world of real-time video communication you never know…

In order to quickly identify the correct RTP stream in Wireshark it’s very useful to know the IP address and port that’s being used. Whether you look at the remote or local address doesn’t matter as long as the appropriate Wireshark filter is applied. For this example we’re going to use the local address, which is the destination of the packets we’re interested in since we want to extract the received stream. chrome://webrtc-internals contains connection stats in the sections that starts with Conn-audio  and Conn-video . The active ones will be highlighted with bold font, and based on the transportId  in previous step we know wether to look at the audio or video channel. To find the local address in our example we need to expand Conn-audio-1-0 and note the field googLocalAddress , which has the value 10.47.4.245:52740

Now that we have collected all the information necessary to easily identify and extract the received video stream in our call. Wireshark will likely show the captured RTP packets simply as UDP packets. We want to tell Wireshark that these are RTP packets so that we can export them to rtpdump format.

Second, list all RTP streams by selecting from the menu Telephony → RTP → RTP Streams. The SSRC of our received video stream will be listed together with other streams. Select it and export it as rtpdump format. (video_replay also supports the pcap format, but because of very limited support for various link-layers I generally recommend to use rtpdump.) Finally we have a file that contains only the received video packets which can be fed into video_replay. Use video_replay to playback the capture

Finally we’re ready to replay our captured stream and hopefully display it exactly how it appeared at appr.tc originally. The minimal command line to do this for our example is:

The command line arguments are easy to understood from the previous text.

If your goal is to reproduce a WebRTC issue and post a bug, providing the rtpdump together with the command line arguments to replay it will be tremendously helpful for certain issues. However, if you want to do some more debugging on your own video_replay has a a few more command line options that may be of interest.

Let’s look at the current help text and explain what the different options do.

Flags from ../../webrtc/video/replay.cc at the time of this writing:

And here is what they mean with some more explanation:

When you get familiar with process above there are a couple of shortcuts you can apply in order to be more effective.

First, you can often identify the RTP video packets in Wireshark without looking at chrome://webrtc-internals. Most video packets are usually more than 1000 bytes, while audio packets are more like a couple of hundred bytes. Decode the video packet as RTP and Wireshark will display both the SSRC and payload type. Wireshark doesn’t automatically know is whether RED is used or not, but from experience you can probably guess that too since payload types normally don’t change between calls.

Second, if your pcap is supported by video_replay you can feed the original pcap directly into video_replay. There will be a lot of noise on the command line output as it ignores all the unknown packets, but it will decode and display the specified stream.