Last October I did a post on some quirks I found when applying camera resolutions constraints with getUserMedia. Surprisingly I found the resolutions that were returned were sometimes different than what you ask for, even if you make your constraints mandatory. Firefox didn’t support programmable video resolution constraints at all.

That was a while ago, so earlier this summer I checked my getUserMedia camera resolution finder again. This time Chrome 36 passed all my tests:

Constraint handling has clearly changed, but how? I could not find any coherent documentation on this, so I decided to update my resolution scanning code and re-run my analysis to empirically determine how mandatory constraints are handled.  If you choose to read-on below, you’ll see much has been fixed, but there are still a few nagging issues.

If you want to skip my How to Figure Out WebRTC Camera Resolutions post from last October, then here is a quick summary:

Now that we are done with that history, let’s walk through my latest tests.

I rewrote my original code (see the next section) and conducted new full resolution scans of every 4:3 and 16:9 resolution combination between 2160 vertical pixels and 1. I tried doing some tests on Firefox, but you still need to manually set your resolutions if you want something different than 640×480, so I did not focus my tests there. I also did some quick test on Opera 23 on desktop – it appeared to responded just like Chrome 36, in fact it identified itself as Chrome 36, but I did not do an extensive analysis of this. My results below are focused on Chrome across desktop and mobile.

Results can fall into one of 4 categories:

Note my scanning code was occasionally buggy on Chrome 36 when doing long scans. I would randomly get a 2×2 resolution returned or intermittent track failed responses. I am sure I have some race conditions in my code that are causing this, but it does not appear to happen as often in Chrome 37 or 39. In these cases I manually verified the resolution and corrected the results accordingly.

You can run the tests yourself with my new scanner here.

Please see the original How to Figure Out WebRTC Camera Resolutions post for a walk through on how to adjust constraints and use getUserMedia with different camera resolutions. I didn’t make any major changes to my methodology from last time, but I did make several modifications to improve the functionality to help with testing including:

The only real WebRTC specific improvement was on the Device Enumeration. I hope to do a separate post on that to cover camera selection in more detail after I dig into the newer NavigatorUserMedia.getMediaDevices API. I kept with the existing vs. MediaStreamTrack.getSources for device enumeration now.

You can check out my complete code on github.

This took a while to compile – scanning 4320 different resolutions can take hours depending on the device. Here is a quick summary table of my results:

If you want to see the full aggregated results dump in a single table from all my tests, you can find that here.

It is a little difficult to parse the table above, but these results are much closer to what I would expect vs. my results last time. Here are some highlights: 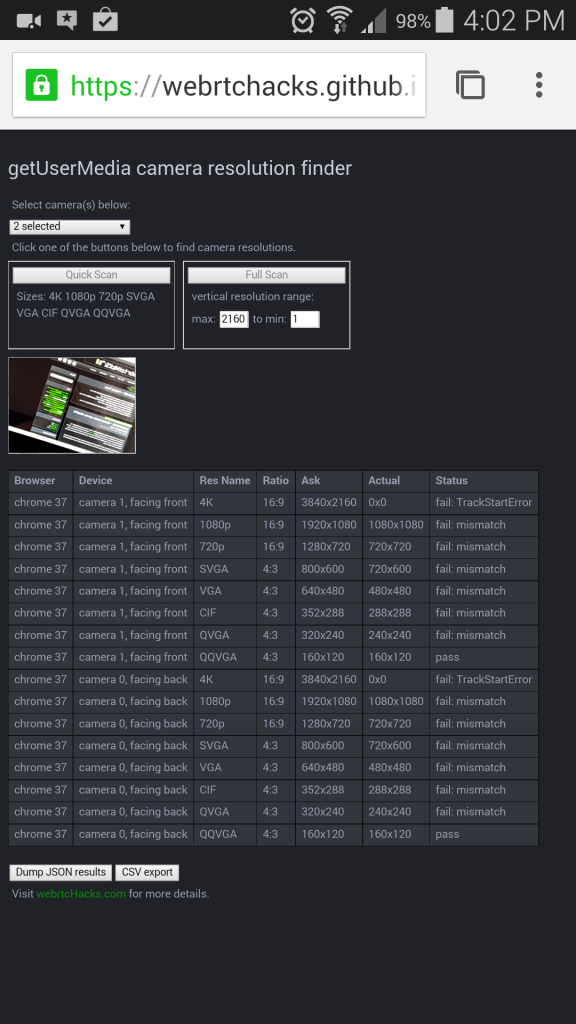 To verify I didn’t do something wrong, I did some checks against the Google Chrome’s getusermedia-resolution sample. I noticed here that only a maximum or minimum mandatory constraint was set. When I modified the sample to add both maximum and minimum constraints, I had the same result.

You can see my jsfiddle for reference.

Actually, experimenting with the original getusermedia-resolution sample I also get weird results. The constraints are set to  minWidth: 1280, minHeight: 720  but the output shows 720×1280 when I have my GS5 vertically oriented: This is just speculation, but playing around with GoogleChrome’s original sample, I suspect my GS5 is adjusting the orientation of the video automatically (width<->height) but the videoWidth and videoHeight properties are not being flipped accordingly. I’ll put an inquiry in and report back.

So Are the Camera Constraint Issues Fixed?

Mostly. Chrome 36 is much better than my old Chrome 30 tests, but leaves a lot to be desired. However, if you just want a video stream with a very specific resolution then this appears to be more-or-less fixed in Chrome 39. The only open issue I see are:

Ultimately I would advise against using both max and minimums of the same value to make sure you get exactly what you ask for. Using a range or just using optional is probably a safer bet unless you absolutely need a specific resolution.

You still need to Check the Specs

It looks like there are some changes coming in the future.  The constraint syntax has changed slightly in the constraints draft, but this has not been updated in Chrome just yet (as of 38) – see this Chromium thread for details.

If these are issues that matter to you, also make sure to monitor the getUserMedia draft too which was updated earlier this month.

Lastly, my example above only deals with changing resolutions locally. This becomes more complicated when you want the remote party wants the sender to change resolutions. The constraints draft covers some options there.

Miguel from Google provided some helpful clarifications in the comments below:

17 comments on “WebRTC Video Resolutions 2 – the Constraints Fight Back”